Peering back into the Big Bang - TechCentral
THE BEST IN TECH SA scientists are studying collisions inside the Atlas detector, searching for the famous Higgs boson

In the beginning, just before the Big Bang, scientists believe the entire universe was packed into a tiny ball of mass just 10-38cm wide. To put that in context, an atom is many, many times that size.

This tiny ball of mass exploded and grew over the last 13bn years to create the vast spaces, stars and planets that make up our universe today.

Technology and innovation — together with brilliant theoretical minds — have allowed physicists to see as far back in time as about 300 000 years after the Big Bang.

It’s not time travel, though listening to the scientists at the European Organisation for Nuclear Research (Cern) you could believe something science fiction could be science fact in a few years.

Scientists have used the speed of light to look as far back as they can into the past. Using equipment like the Hubble telescope, astronomers can see the origin of light and back to the early universe. 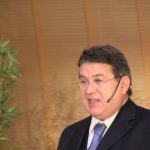 But because the universe was so hot early on, it’s difficult for astronomers to see further back than about 300 000 years after the Big Bang. However, Cern researchers expect the Large Hadron Collider (LHC) particle accelerator to recreate the Big Bang on a miniature scale.

The LHC is a 27km technological marvel built under France and Switzerland. Buried up to 175m underground, it’s overseen by more than 30 000 scientists from around the world.

In the quest to find the universe’s origins, it takes the smallest known particles and crashes them together with as much energy as possible. Different particle collisions create different scenarios and scientists hope they can recreate conditions in the early universe.

The collider is not the first of its kind, but it is the largest and, since it became operational in 2008, it has broken several records in the study of particle physics, says Sergio Bertolucci, Cern’s director for research and scientific computing. Bertolucci says the collider can theoretically crash together particles at 14 trillion electron volts, though the group will only try this once it has studied all it can under current energy levels.

The accelerator is made up off two basic components — superconducting magnets and positively or negatively charged panels that push the particles through the machine.

The LHC has four zones — or experiments — where different aspects of the universe are studied. They are Atlas, Alice, CMS (Compact Muon Solenoid) and LHCb (the Large Hadron Collider beauty).

Some zones study the origins of the universe; others are looking for an elusive particle called the Higgs boson, the so-called “God particle” that scientists hope will explain what gives objects mass.

One of the projects will even try and prove the existence of an alternative universe. Another will try to figure out what “dark matter” — a form of matter believed to make up 90% of the universe — is made of. Cross section of a superconducting magnet (click to enlarge)

Each experiment is furnished with detectors, giant structures in which the particle collisions occur.

The Atlas and CMS detectors are large and used for general-purpose study and scientific discovery. The LHCb and Alice detectors are much smaller and used for specific studies, particularly the study of dark matter and the Big Bang.

SA scientists from the University of Johannesburg are working on Atlas, hunting for the Higgs boson. SA is connected to Cern through the Seacom submarine cable system.

Finding the Higgs boson would tell us exactly where mass comes from — and understanding mass would go a long way to explaining how the universe works. Though the LHC has been running smoothly in recent months, its start date was delayed several times.

First, it was put on hold because its construction took longer than expected. And a glitch in 2008 prevented scientists from starting planned initial experiments.

“This really damaged our pride more than anything else,” says Bertolucci.

Essentially, an electrical join in one of the thousands of magnets connected in parallel was not installed correctly, causing friction and heat in the system.

Finding and repairing the single join took a year to complete, because there are 10 000 electrical joins in the 27km-long tunnel.

Because the amount of energy produced by the machine is directly proportional to the radius of the device and the strength of the magnetic field, special attention is paid to the development of strong magnets.

Incredibly, the electrical supply to the magnets equals the power supplied to the entire city of Geneva in Switzerland.

Conditioning the magnets is essential — they will only act as superconductors under perfect conditions.

One of the most important aspects in the whole operation is temperature — the superconductors need an optimum temperature of 4,3K (-268°C) to operate. So the LHC is not only an accelerator, but a cryogenics machine as well.

Also, because of the elliptical movement of the earth, magnets will always move slightly while in place. This is problematic, because any movement creates friction and friction creates heat. The conductor gains resistance and in turn generates more heat, which can lead to disaster.

So every magnet is “trained” before it’s put into the tunnel to find the optimum amount of liquid helium pumped around it, testing the amount of current that will pass through it before it gains resistance, and exactly how much of the magnetic strength it can withstand before it starts to move.

Scientists around the world are hard at work studying the results of the first collisions made in the massive machine and Bertolucci says new discoveries have already been made. “We are pushing the boundaries of particle physics. We are also rediscovering all the old particles we already knew about.”

He is confident that by this time next year scientists will have either proved or disproved the existence of the Higgs boson. “Either theorists will rejoice, or they will have to go back to devising a new theory,” he says.  — Candice Jones, TechCentral