Sony Xperia Z3 review: large and in charge - TechCentral
THE BEST IN TECH Since the first Xperia smartphone from Sony hit the market in 2008, the company has been rolling out device after device, garnering a small but dedicated and growing fan base. Today, the Xperia range offers a mature selection of devices that the company hopes will appeal to those wanting a slick, high-end smartphone that works well with Sony’s hardware and software ecosystem.

TechCentral recently reviewed the Xperia Z3 Compact, the smaller but technically nearly the Z3’s equal. Indeed, the two devices are almost identical in every way, but users who prefer a large screen device will appreciate the additional real estate on the Z3.

Comparing the two devices side by side, the Z3 offers a much brighter and vibrant display. It is also marginally thinner — 1,3mm to be exact — than the Z3 Compact.

Comparing the Z3 to its main competitors — the HTC One (M8), the LG G3, and the Apple iPhone 6 — there isn’t too much of a size difference. However, the Z3 is noticeably thinner than both the One (M8) and the G3, but slightly taller, too.

We reviewed the white version of the Z3, which — unlike the black versions in the Xperia range — doesn’t show smudges and fingerprints as prominently. But those with OCD will still find themselves wiping the phone’s glass exterior regularly to keep it clean. 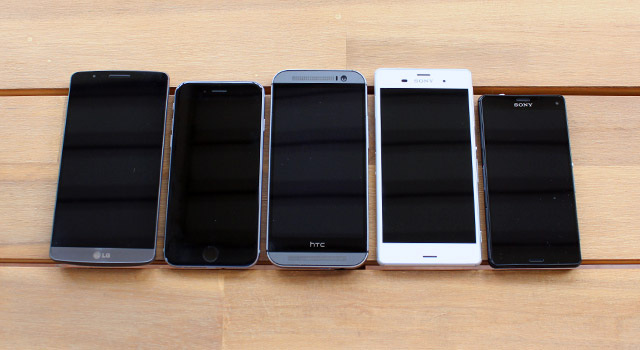 One of the best features of the Xperia range is the IP65/IP68 rating. This means the Z3 is dustproof and can be held underwater for up to 30 minutes at a depth of 1,5m. Sony says this is only for fresh water, so don’t expect to go surfing with the Z3.

As a result of the waterproof rating, the Z3’s ports feature protective covers to keep water and dust away from the phone’s internals. This includes the micro USB port on the left side of the phone, and the microSD and nano Sim slots on the right.

The Z3 features a power button and volume rocker just below this slot, within easy thumb reach, and there is also a dedicated camera shutter button — a feature we wished more smartphones had.

Like the Z3 Compact, the Z3 boasts an impressive 20,7-megapixel camera that holds its own in low-light conditions thanks to its ISO rating of 12 800. But be warned that images taken at the upper end of its ISO range tend to be grainy. The Z3 can shoot video at a mammoth 4K resolution, too, so it’s future-proofed for when you upgrade your TV in a few years’ time.

For PlayStation 4 owners, the Z3 introduces a number of unique features. Using the PS4’s remote play function, the Z3 can be used along with a PS4 controller to play games. It can also be used as a second screen where games support this function.

Indeed, the Z3 is a workhorse and features some of the best hardware seen in a high-end smartphone. There’s a quad-core 2,5GHz processor with 3GB of RAM. We weren’t able to find a videogame that it couldn’t take in its stride. Even basic video editing on the phone, using the native editing suite, proved effortless.

With this hefty performance profile, Sony had to compensate with an equally good battery. The 3 100mAh unit it used offers an impressive battery life of more than a day of heavy use.

That’s particularly impressive given the wide array of communications technologies the phone supports. Most 4G/LTE bands are included, though not Telkom’s 2,3GHz band. It supports dual-band Wi-Fi 802.11 a/b/g/n/ac, near-field communication, GPS and Bluetooth 4.

The Z3 runs Android 4.4 (KitKat) and there is a planned upgrade to 5.0 (Lollipop) in the works, according to Sony, though there’s no release date set yet. Like most Android handset makers, Sony has overlaid its own skin. But it’s well designed. The company has bundled a number of its own apps on the Z3, too, including Walkman, PlayStation and Movies. Photos taken in low light showing the results from the iPhone 6, left, and the Xperia Z3

In our top smartphones in 2014 feature, we named the Z3 Compact as one of our favourite smartphones of the year, and by association the Z3 is included, too. It’s a great all-round performer with an impressive features list that will keep any smartphone-savvy user happy.

The Xperia Z3 is not the cheapest high-end smartphone on the market. Expect to pay as much as R11 000 to get it from a local network operator. However, it is available online for about R8&nbsp000.  — © 2014 NewsCentral Media