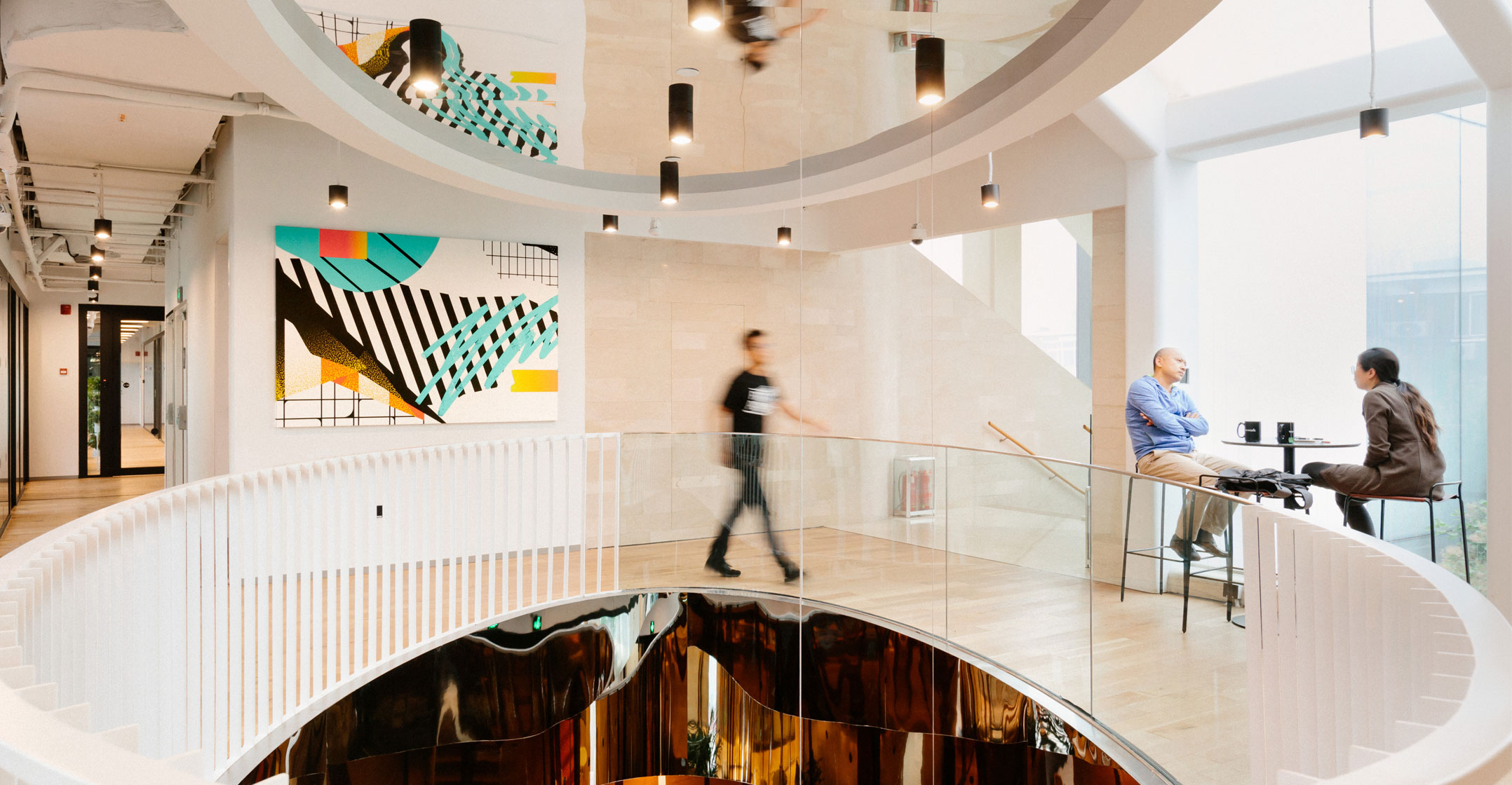 Inside a WeWork facility

WeWork’s plan to go public, in one of the largest stock offerings of the year, has hit a wall. Now the company will see whether sacrificing its divisive leader can save a crucial fundraising effort.

Adam Neumann, who co-founded WeWork and turned it into one of the world’s most valuable start-ups, stepped down as CEO on Tuesday under pressure from the board. He took a new role as nonexecutive chairman and forfeit his control over management decisions.

The move is designed to salvage an IPO, which had been met with immediate scorn from public investors. A litany of apparent conflicts of interest and Neumann’s propensity to burn through capital were chief concerns. “In recent weeks, the scrutiny directed toward me has become a significant distraction,” Neumann, 40, said in a statement on Tuesday. “I have decided that it is in the best interest of the company to step down as chief executive.”

Two senior WeWork executives, Sebastian Gunningham and Artie Minson, were appointed as co-CEOs. WeWork’s parent company, We Co, still intends to go public at some point, but people briefed on the deliberations said it’s unlikely to take place as soon as next month, as was planned. The new CEOs said in a statement that they will be “evaluating the optimal timing for an IPO”.

We Co has been under a tight deadline to go public. It needed to do so by the end of the year in order to secure a US$6-billion debt financing contingent on a successful stock offering. The company, which is deeply unprofitable, will need to find an alternative source of capital next year if the 2019 IPO falls through. Gunningham and Minson “anticipate difficult decisions ahead” to protect the company’s “long-term interests and health”, they wrote in an e-mail to staff.

With timing of an IPO now up in the air, the company is in talks with Goldman Sachs and JPMorgan Chase about a new $3-billion loan, which — like the earlier planned financing — would also be contingent raising a substantial amount of new equity, people with knowledge of the matter said. A likely source of that equity infusion is SoftBank Group, the company’s largest shareholder, the people said. The Wall Street Journal earlier reported the loan discussions.

In a bid to reduce costs and slow the cash burn that has spooked investors, We Co is also considering job cuts and shedding or spinning out non-core businesses, such as WeGrow, an experimental New York City private school, according to people with knowledge of the matter. Eliminated positions would number in the thousands, one person said.

After Neumann’s decision to step aside, WeWork’s high-yield bonds initially fell to as low as 92.75 cents on the dollar, their lowest level in more than four months. Rett Wallace, CEO of Triton Research, said WeWork’s problems run much deeper than Neumann. “WeWork suffered from three things that, when put together, are not good news for a company. The first was significant losses. The second was opacity — they made it very difficult to analyse the company. And then third was arrogance,” Wallace said. “The only thing that changed today is possibly the third bucket.”

Although 2019 will be the busiest year of the decade for IPOs, the party has been spoiled by several under-performers. Two of the largest offerings, Uber Technologies and Lyft, are trading below their initial prices. Like WeWork, the ride-hailing companies bleed cash. Investors’ reaction to these three stocks could force venture capitalists to rethink the value they place on a grow-at-all-costs approach to business.

Over the last nine years, WeWork raised more than $12-billion and set up co-working spaces around the world, including in South Africa, where people rent desks and conference rooms. Neumann and his co-founder, Miguel McKelvey, have long promoted a higher mission for the company than being a commercial real estate landlord. They banned meat from company functions and have opened dorm-style apartment buildings, in addition to the school.

What I want you to know, most of all, is that even as some things change, the core of who we are never will

“There will be changes ahead, and our leadership team will communicate transparently about them, just as we did today,” McKelvey wrote in a message to staff late on Tuesday. “What I want you to know, most of all, is that even as some things change, the core of who we are never will — our culture of authenticity, inspiration, learning and growth remains stronger than ever.”

Neumann’s We-powered rocket ship hit turbulence early this year. SoftBank called off a plan to buy a controlling stake in the business for $16-billion. The Japanese conglomerate put in $2-billion instead, and Neumann embarked on a flight to the stock market for additional capital.

WeWork published its IPO prospectus last month, and investors were aghast. The company had never turned a profit and failed to make a convincing case it could do so. The company had lent Neumann money as it paid him rent on buildings he owned. WeWork paid him about $6-million for a trademark to the name “We.” The board is composed entirely of men.

Neumann, his board and their financial advisers were wholly unprepared for the reaction from public investors. They took steps to address these issues, but some directors decided they’d need to go further. Masayoshi Son, the founder of SoftBank, pushed for Neumann’s resignation as an apparent way to satisfy prospective investors in WeWork and in his own ventures, which are in many ways tied to the fortunes of WeWork.

SoftBank expected that Bruce Dunlevie, a WeWork director and partner at venture capital firm Benchmark, would be on its side. Benchmark had orchestrated the ouster of Travis Kalanick from Uber two years ago. Dunlevie initially expressed support for Neumann, but by Sunday, the venture capitalist told Neumann he would side with SoftBank, said a person briefed on the discussions. Although Dunlevie praised Neumann in a statement on Tuesday, he said he was “thrilled” with the new leadership. Neumann gives WeWork star power, and the new pair of CEOs, investors hope, offer experience and stability. WeWork hired Minson in 2015 from Time Warner Cable after he helped sell the company to Charter Communications. He has served in various roles at WeWork, including president and chief operating officer. Most recently, he ran the finance department and led preparations for the IPO. Gunningham was hired last year from Amazon.com, where he oversaw the company’s marketplace of sellers.

The management changes show would-be investors that WeWork is trying to tackle corporate governance concerns, but they do little to address underlying weaknesses in the business model, according to Jeffrey Langbaum, an analyst at Bloomberg Intelligence. “The delay gives WeWork time to persuade investors and make additional fixes but won’t address operating risks such as the lack of a clear path to profitability and long-term leases that may become an albatross in an economic downturn,” Langbaum wrote.

The new chiefs convened WeWork employees on Tuesday for an all-hands meeting to discuss the changes. Although Neumann was notably absent, Gunningham and Minson were joined on stage by two investors and maintained an upbeat tone, according to two people who watched the presentation.

When Miguel, Rebekah and I founded WeWork in 2010, we set out to create a world where people work to make a life and not just a living

As part of Neumann’s departure, he has agreed to further reduce his sway in board decisions, and his wife, Rebekah, will relinquish her role in the business, said the people briefed on the plans, who asked not to be identified because the details are private. Neumann’s stock now carries three votes per share, down from 20 in the initial plan. Rebekah Neumann, who was listed on the IPO prospectus as a founder and CEO of the WeGrow education arm, will leave. McKelvey, the third founder, retains his title of chief culture officer.

“When Miguel, Rebekah and I founded WeWork in 2010, we set out to create a world where people work to make a life and not just a living,” Adam Neumann wrote in an e-mail to employees. “As we take this next step in our company’s journey, I am equally ready to listen, grow and continue working relentlessly on my commitment to all of you.”

The new question for WeWork is whether it can reach new heights without the man whose singular vision drove the business until today. “That’s the catch-22 here. There needed to be some change, but it is a material risk,” said Gene Munster, a managing partner at Loup Ventures. “The company’s performance is embodied in the leader.”

When the new CEOs turn their attention to the IPO, they may want to revisit a section of the prospectus labelled risk factors. The paperwork lists an economic recession, political turmoil and failure to turn a profit — and Neumann. WeWork’s future success “depends in large part on Neumann”, the filing says. Neumann, it says, “is critical to our operations”.  — Reported by Michelle F Davis, Ellen Huet and Gillian Tan, with assistance from Liana Baker, Natalie Harrison, Taylor Riggs and Sridhar Natarajan, (c) 2019 Bloomberg LP