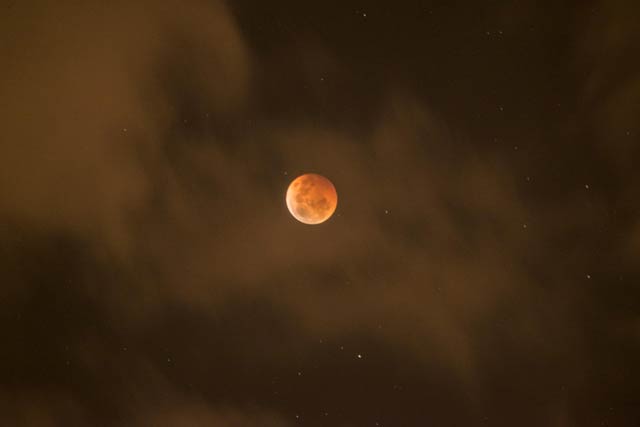 For many people, the sight of the moon turning deep red — some would say blood red — during a lunar eclipse is a wonderful sight. And that’s precisely what many millions of sky gazers in South Africa were able to see early on Monday morning.

But for a dedicated few, this is a sign of something much more terrifying: nothing less than the apocalypse itself.

Lunar eclipses are an impressive and visible reminder that the night sky isn’t a static backdrop but a dynamic show filled with worlds that move and interact. In this case, the moon’s orbit toopk it directly behind the Earth, opposite the sun and into our shadow, which carved out evermore of the moon’s face until it was entirely dark.

Or, at least, it would have been if the Earth’s atmosphere wasn’t bending (refracting) light into that shadow region, known as the umbra. After passing through so much air, the bluer colours are scattered out and all that remains is red. We see this effect in the reddening of the sunlight every sunrise and sunset.

In other words, this blood moon is nothing less than all the sunrises and sunsets of the Earth, reflected back at us from the surface of the moon. Sadly, this romanticism will be lost on a dedicated few who will instead greet it with fear as a portent of terrible events.

Enter the tetrad
This latest event marks the fourth lunar eclipse in a row with no partial eclipses to spoil the run. Such a run of eclipses is known as a tetrad. While not uncommon — there have been eight such tetrad eclipses in the 21st century — they are unusual, with none between 1400 to 1900.

What makes this final of the four a little different is that it’s during a super moon. This is when the full moon occurs when the moon is closest to the Earth in its orbit, thereby appearing about 14% bigger and 30% brighter than when furthest from us.

The last time there was a blood super moon (or less poetically: a perigee lunar eclipse) was in 1982, with the next not until 2033.

So, this larger and more noticeably red moon was the best for a generation or more.

But not everyone was looking forward to the event. There were reports from stores in the US of panic buying in anticipation of the eclipse, stockpiling supplies in the fear that this is the apocalypse.

What drives this fear of an otherwise natural, albeit particularly uncommon, lunar eclipse?

It seems to come from the fact that the previous lunar eclipses of the tetrad have fallen on dates of significance in the Jewish calendar. But that’s happened before and the world didn’t end then.

Fuelling all this are two Christian ministers: Mark Blitz, who wrote the bestseller Blood Moons: Decoding the Imminent Heavenly Signs; and John Hagee, who wrote his own bestseller, Four Blood Moons.

Nasa scientists say there have been a number of recent blogs and posts online claiming the Earth would be hit by an asteroid between 15 and 28 September, the date of the lunar eclipse.

But Paul Chodas, manager of Nasa’s near-earth object office at the Jet Propulsion Laboratory, said there was “no existing evidence” that an asteroid or any other celestial object would hit Earth anytime “over the next century”.

Now the asteroid claim has been dismissed, Blitz has reportedly turned his attention to earthquakes.
These rumours have clearly frightened some believers, but how much truth is there that a lunar eclipse will trigger a devastating earthquake?

According to the evidence, a categorical “none”, says the British Geological Society, with studies showing the coincidence of earthquakes and the phases of the moon were entirely random.

That the moon has an effect on the Earth is undeniable; we can see that every day with the tides. The Earth itself will be squeezed in the same way, although with a barely noticeable rise as solid rock is less malleable than water.

Along with this Earth-tide, the seabed will also experience changing pressure from the weight of all the water above as the tides rise and fall. That this might be a trigger of earthquakes seems reasonable, and was thought to be so for a century, but the numbers just don’t add up.

For starters, the difference in the pressure on the rock caused by the tides is less than the normal tectonic forces that the plates experience in their slow migration around the Earth. More definitively, there’s simply no observed link between earthquake severity and the tide maximum.

It’s also worth keeping in mind that the only difference between a full moon and the blood moon is that the latter just happens to be passing through the Earth’s shadow and hence turns a spooky colour. Its actual distance from us (and hence apocalypse-inducing force that it could apply) is be the same.

Even though this lunar eclipse is occurring during a super moon, the increase in tide height from this closer moon is at most 10cm, so hardly an apocalyptic flood.