The Nokia Lumia 720 looks a lot like a smaller version of the more expensive 920. That’s not a slight, but very much a compliment.

Although we loved the 920’s hardware and features, we bemoaned its size and considerable weight. The 720 has slightly less impressive specs, but it’s still equipped to hold its own against many top-end devices and, given it costs substantially less than them, we rate it as our favourite Lumia device to date.

Nokia has eschewed the 4,5-inch display found on the flagship 920 for a moderately smaller 4,3-inch screen. Though the display’s resolution of 800×480 pixels — or roughly 217 pixels/inch — isn’t exactly groundbreaking, it’s vibrant, crisp, offers excellent visibility in direct sunlight, and is in keeping with the competition in its price range.

From a features point of view, however, the 720’s display outdoes its competitors by including Nokia’s “super-sensitive touch” functionality that allows you to use the screen while wearing gloves.

The 720’s matte polycarbonate body — available in multiple colours — feels great in the hand. At 128g, the 720 is lightweight but sturdy, and the matte finish is far more resistant to grime and grease than the glossy covers Nokia often favours. 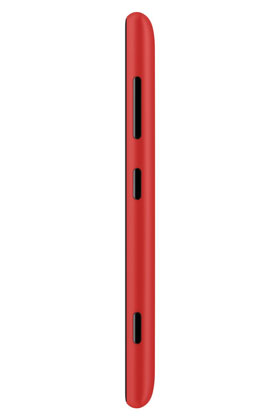 Price is often the key differentiator in the midrange, and Nokia has settled on R5 699 for the Lumia 720. That’s a couple of thousand rand less than any of the top-enders for a handset than can do most of the things they can — and, in the South African market, the phone also comes bundled with a wireless charging cover and wireless charging plate worth R1 200.

The question, then, is which corners — apart from screen resolution — has Nokia cut to keep the cost of the Lumia 720 down? For starters, there’s the internal storage. Though it’s limited to 8GB, the microSD slot allows one to supplement this by a further 64GB. Sure, 64GB microSD cards aren’t cheap, but 8GB and 16GB cards are and few people need more.

Impressively, the Finns haven’t taken shortcuts with the 720’s camera — often a key motivator for buying a top-end device. Despite its midrange price tag, the 720 includes a 6,1-megapixel camera with Carl Zeiss optics and an LED flash.

The camera delivers speedy autofocus and excellent automatic exposure and includes Nokia’s “Smart Shoot” feature, which takes multiple shots in a row and allows you to select the best face for each subject or the best shot overall. There’s also the “Erase” feature that removes unwanted objects or people in shots.

The rear shooter also captures video at 30 frames per second at 720p resolution. Unlike the budget Lumias, there’s also a front-facing camera, albeit only 1,3 megapixels.

Powered by a 1GHz, dual-core processor and 512MB of RAM, the 720 is decidedly less powerful than its bigger siblings on paper, but in practice we found Windows Phone 8 to be responsive and agile when moving between menus and applications.

Nokia has kept the 720’s exterior simple. All of the physical buttons — power/lock, volume and the dedicated camera button — run down the right-hand side of the device. They feel resilient and are well placed. The lock button is beneath the volume rocker, two-thirds of the way up the handset, and is in just the right spot for use with your thumb.

Beneath the display are the standard three capacitive-touch buttons: back, home and search. While we have nothing against capacitive-touch buttons, the search button remains as infuriating on the 720 as it is on every other Lumia device. As on other Windows Phone devices, all it does is open Microsoft’s search engine, Bing. What we’d really like to see, at the very least, is that button allowing for contextual search, be it contacts in the phonebook or text on a website.

Another feature that Nokia usually reserves for its top-end devices but that’s made it into the 720 is support for its wireless charging accessories. While this may not be the most exciting feature, it speaks to Nokia’s desire to position this device not as a midrange phone but as a lower cost alternative to the top end. That’s backed up by Nokia’s generosity in the battery department. Like the 920, it includes a non-removeable 2 000mAh battery. As it doesn’t have to contend with the extra processing power or resolution of the 920, it’ll last through a busy day with ease.

As with other Lumia handsets, the lack of applications for Windows Phone still dogs what is otherwise a really good operating system. That said, the list of missing apps is shrinking fast.

Nokia’s worked hard to ensure the gaps in its app offerings are covered either by proprietary services — like the excellent Nokia Maps and Nokia Music — or by third-party equivalents. But there are some apps you just can’t mimic. Key among these are Instagram and South African banking applications.

With its reasonable price tag, potent feature set, and streamlined exterior, the Lumia 720 ticks most of the boxes we expect of a modern smartphone while managing to come in substantially cheaper. Nokia has made great decisions about what fat to trim to keep the 720’s price down and, as a result, deserves to sell a ton of them.  — (c) 2013 NewsCentral Media