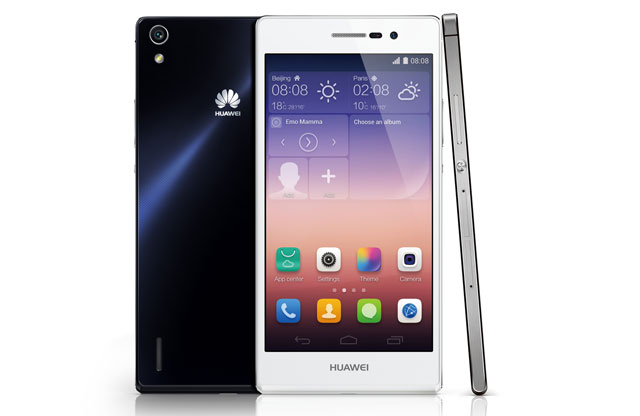 The designers of the Ascend P7, the latest flagship smartphone from the China’s Huawei, have clearly drawn inspiration from Apple.

The latest iteration in the Ascend range, the P7 is a 5-inch smartphone that checks all the right boxes in terms of aesthetics. It’s just 6,5mm thick and weighs only 124g. Huawei claims it’s the lightest 4G/LTE smartphone on the market. That may be true, but it certainly isn’t the top performer.

The first thing you’ll notice as you unbox the P7 is a number of familiar features, not the least of which are the brushed aluminium sides that look uncannily similar to the iPhone’s. Also, the square edges, glossy back cover and the placement of the power button look remarkably similar to Sony’s Xperia Z line-up. Why fix what works?

It’s not only in the design where Huawei has borrowed ideas for the P7. Its customisation of Android (it’s running KitKit 4.4.2) in many respects resembles iOS 7. For example, the shortcut control panel on the P7 is a straight crib of iOS 7’s Control Centre (see image below).

As it did with the Ascend P6, Huawei has ditched the Android app drawer in the P7, further mimicking the iPhone operating system. It’s a controversial move as it results in all installed applications being placed on the device’s home screen/s. Although apps can still be grouped, users no longer have a choice of which apps to place on the home screen/s as everything is there by default.

We don’t like it. It might appeal to users who have not used Android before, but it’s unlikely it will find favour with power users.

Programmable NFC tags
Under the hood, the P7 is not top end. There’s a 1,8GHz Huawei Kirin 910T quad-core processor, 2GB or RAM and 16GB of flash storage. The P7 is not the best performer when running processor- and graphics-intensive applications such as the latest games, but handles Web browsing, e-mail and similar tasks without any complaints.

The 5-inch LCD is a big improvement over the P6, offering a full-HD display for a pixel density of 441ppi. The screen is bright and vibrant, too.

The P7 features one expandable microSD card slot, which can accommodate cards of up to 64GB in size. The 2 500mAh battery delivers an average day’s charge.

There’s support for near-field communication (NFC) and the P7 comes with two programmable NFC tags that can be programmed using Huawei’s Magic Tags app. You can create a set of conditions so that when a tag is tapped it changes the phone’s settings. This could prove useful for switching between home and work parameters.

One area where the P7 really stands out is its front-facing camera — the 8-megapixel, wide-angle shooter is ideal for the “selfie” generation. We just wish there was a front-facing flash, too. Something for the P8, perhaps?

The P7 can also capture footage at 1080p at 30fps using its 13-megapixel rear-facing camera, which features in-built optical stabilisation.

In summary
Huawei vice-president for mobile devices Joon Suh Kim says the P7 was “inspired by the natural curves of a water droplet”. It would be fairer to say it was inspired by rival devices.

That said, as a midrange device, the P7 offers good value for money.

It’s a good-looking smartphone that will attract consumer attention for its excellent front-facing camera.

If you are not too fussed with how the operating system has been tweaked, this smartphone should serve you well.

The Huawei Ascend P7 is available at a recommended retail price of R6 699, but shop around as you’ll likely be able to find it for as little as R5 000 from some online outlets.  — © 2014 NewsCentral Media