In a shock development, controversial communications minister Siphiwe Nyanda has lost his job.

Padayachie, who had served as deputy communications minister under the late Ivy Matsepe-Casaburri, was most recently deputy minister of public service & administration.

News of Nyanda’s axing came as a surprise to political analysts given that he was seen as politically close to Zuma. 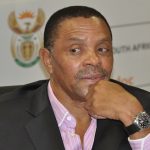 The president’s decision to remove him from the portfolio comes just months after the spectacular fall-out between Nyanda and his former director-general Mamodupi Mohlala, whom he dismissed.

Nyanda has been dogged by controversy ever since taking office as minister, with allegations that he benefited from dodgy tenders.

Dina Pule, Nyanda’s deputy, has also been replaced. Zuma has named her deputy minister in the presidency where she will be responsible for performance monitoring, evaluation and administration.

Former parliamentary house chairman Obed Bapela has been appointed deputy minister of communications. Bapela is well known for his criticism earlier this year of MPs following a report that revealed the majority of parliamentary workers are computer illiterate.

Ismail Vadi, the chairman of parliament’s portfolio committee on communications, has welcomed the appointment of both Padayachie and Bapela.

“Both are sensible appointments and bring vast experience to the portfolio,” Vadi says.

“They will be able to hit the road running and will be able to intervene to stabilise the department of communications and several crisis-ridden public entities.”  — Candice Jones and Duncan McLeod, TechCentral

TechCentral will have full analysis of this story on Monday…