Long road to the top for Gijima’s chief geek

Jonas Bogoshi’s rise to become leader of one of SA’s most prominent listed IT companies, Gijima, is filled with stories of how he overcame hardship.

The rags-to-riches story is a fairly common one shared by SA’s black elite, but few people I have met carry it with the same dignity as Bogoshi.

A reserved man with a definite geeky streak, there is nothing fake about Bogoshi. There’s certainly no pretence in his tone when he tells me one of his first jobs was as a gardener for a white family in northern Pretoria.

Growing up in apartheid, neither of his parents was educated, but both pushed him to excel in his school career. His mother was a domestic worker, and his father — a painter by trade — was forced to take odd jobs.

“When I was really young, my mother would make me read to her. She would say, ‘No, that’s not right. Try again. Read like you are speaking.’”

Says Bogoshi: “I didn’t know it then, but she couldn’t read. She would listen carefully to how I read and make corrections as I went along. She was remarkable.”

Bogoshi has a special sense of family because he is an only child. He hadn’t been expected to live — his mother had several children before him, but none survived, he says, without elaborating. He says that knowing his siblings didn’t get a chance at life made him strive even harder for his own success.

While working in the garden and attending school in Pretoria, Bogoshi discovered he had a flair for maths. “I would help my employer’s children with their maths homework. He even offered me a job as a foreman in his carpet-cleaning business, but I had bigger dreams,” he says.

He never had ambitions to be a CEO until much later in life. His first hurdle was getting himself into university — which he did.

Off the back of excellent school results, Bogoshi managed to secure a place at the University of Cape Town. “I was one of the first black students who didn’t have to ask permission from the department of education to be admitted to university.”

But he was concerned that he wouldn’t get in — usually it was black engineering students who were given the preference. “I had applied for maths and computer science — I never thought I would make it,” he says.

But make it he did, funded by loans he only paid back much later in life. He says it was tough going for few years, being one of very few black students at a then very white university. “It didn’t help that I was shy,” he says. 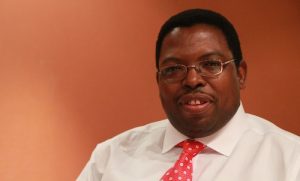 While he managed to avoid some of the meaner aspects of the apartheid system, Bogoshi was still underprivileged and spent his first year at varsity in a single room shared with four young men.

To get by, a friend who shared the room helped him get food, by giving Bogoshi his student card. “We looked very similar, and I would use his card to get dinner from the cafeteria.”

But the administrators eventually cottoned on. “My friends would then put away chunks of bread for me, and that is how I lived out the first year.”

But Bogoshi showed his flair in the computer science class and his professor at the time, John Webb, gave him a paid job as a lab assistant. “I really came into my own in that position,” he says.

Once he’d graduated, Bogoshi joined IBM as a systems engineer, one of 60 graduates taken in by the SA arm of the US technology giant. But he soon realised the dry work of computer engineering was not his passion.

“I pushed for a position in sales because it sounded like something I would want to do,” he says, and eventually got it.

From there it was a shortish road to the head of Gijima. From IBM he went to Shell, then back to IBM and on to Cisco, where he was offered the position of country manager. “I turned it down, because I felt I was not ready.”

Instead, he moved to the State IT Agency, hired by then Sita CEO Mavuso Msimang.

Msimang, who would later become director-general of home affairs, groomed Bogoshi to take the reins from him at Sita. But Gijima pounced, offering him the top at the listed IT group.

“I think it was only really once I got married that I wanted to be the CEO of a company. Now that I am here, I need to figure out what my next dream is,” he says, almost with a hint of melancholy.

As a family man, Bogoshi says he hasn’t spent enough time with his children and wants to change that. “They are older now and need me to be around for them,” he says.

He talks with pride about his three children, a son, 15, and two daughters, 10 and 5. The 10-year-old is most like him, Bogoshi says. “She is quiet and likes to be alone. She can spend hours on the PC.”

Bogoshi hopes that over the next few years he’ll find more time to cook for his family. “I love it,” he says. He even has an application on his Apple iPhone with recipes that he swears by. If only he could find the time to consult it more.  — Candice Jones, TechCentral