DStv's new PVR: the inside story - TechCentral
THE BEST IN TECH In 2010, when MultiChoice began work on its radically redesigned new personal video recorder (PVR) decoder, the DStv Explora, the premise was that it would be a “connected box” that would offer on-demand services over the Internet.

The Naspers-owned pay-television operator had hoped three years ago that South Africa’s fixed-line broadband infrastructure would improve faster than it has, admits its chief technology officer, Gerdus van Eeden. The fact that it didn’t sent the company back to the drawing board.

“We wanted to give customers the same experience as they get in broadband-rich markets,” says John Kotsaftis, who heads DStv Online, a MultiChoice subsidiary that played a pivotal role in the development of the Explora, which was launched at an event in Johannesburg on Wednesday evening. “We had to get consumers to feel like they’re sitting in the middle of a developed market, yet they don’t even need the Internet to use [the Explora]. It’s like a developed-market product, except it’s built for Africa.”

The Explora was fashioned not so much on what traditional pay-TV operators around the world are doing, but on new-generation on-demand services offered by companies such as Netflix and Apple. The result has been that Kotsaftis’s team at DStv Online, which has developed products such as the BoxOffice movie rental system and the DStv Catch Up on-demand service, and Van Eeden’s team in the broadcast technology division have come to work very closely together. “Gerdus’s division and mine are bonded at the hip on almost every product now,” Kotsaftis says.

From 2014, MultiChoice will begin offering its entire VOD catalogue to Explora users to view over the Internet

A key idea behind the Explora was to expand enormously the amount of video-on-demand (VOD) content available to subscribers. As a result, the size of the hard disk has been quadrupled from the 500GB in the current-generation PVR to a staggering 2TB, a large chunk of which is reserved for VOD content. Catch Up content has been expanded five-fold and will now offer a large range of high-definition movies in addition to series and sports material, while the allocation to users’ personal recording space has been doubled to the maximum limit allowed by international content suppliers. The content is all pushed over IS-20, the recently launched Intelsat satellite on which MultiChoice leases substantial capacity.

The Explora has an additional tuner dedicated specifically to receiving VOD content. Most of a satellite transponder is also dedicated to delivering this content.

The second key focus area was on developing a completely redesigned user interface, something that more closely resembles what’s on offer from “over-the-top” players like Netflix and Apple. Gone are lists of programming, replaced with images representing content. The idea was to help subscribers find more content, with a range of instant search and discovery options for VOD and live broadcast material, says Kotsaftis.

Crucially, if consumers stumble across a programme or movie that is almost finished, they can instantly see when it will next be broadcast, allowing them to record it.

Key to all of this is a redesigned remote controller (see picture) that, although resembling earlier DStv controllers, features new buttons to facilitate speedy access to Catch Up and BoxOffice content.

“We built the Explora with the Internet in mind,” says Kotsaftis. “We put a ton of effort into the user experience. The interface has been redesigned and redesigned through several iterations to get it right.”

The Linux-powered PVR was developed almost entirely in-house, with a middleware layer provided by another Naspers company, Irdeto. This, Kotsaftis says, will allow MultiChoice to develop updates a lot quicker than its current off-the-shelf solution.

It’s able to run Java applications, too, though the company isn’t opening the platform to outside developers yet and will probably only do so in the long term — if at all. Kotsaftis says people are more likely to use apps on what he calls the “second screen” — tablets or phones they use while sitting in front of the television. “On the first screen, we are only creating the core apps that we think are required. We have ideas about all sorts of other apps, but many of those belong on the second screen.”

At launch, the Explora has three bundled apps: News24, SuperSport and Weather, all of which have been redesigned compared to their equivalents on the current PVR.

MultiChoice has also attempted to future-proof the new decoder as much as possible. Although the PVR won’t connect to the Internet at launch, the company plans to sell 3G and Wi-Fi dongles starting in 2014. The machine already comes standard with Ethernet for wired connectivity. There are also three USB ports. 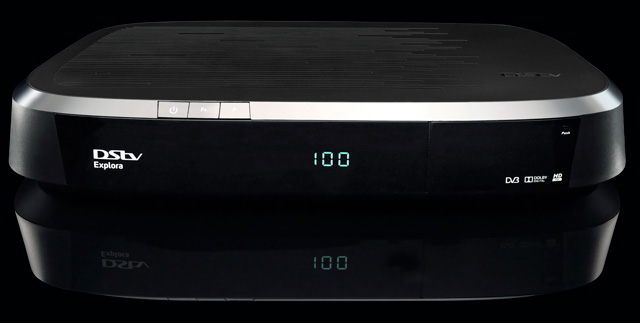 Front of the DStv Explora… 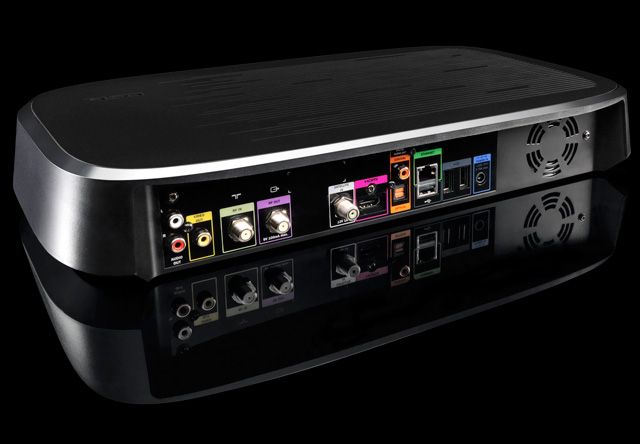 …and a close-up view of the ports

The company plans to offer several solutions to consumers to get the Explora online, including Wi-Fi and something called MoCA, a standard for home entertainment networking using coaxial cabling. It will then begin offering its entire VOD catalogue to subscribers to view over the Internet. It’s unlikely it will encourage users to watch VOD over 3G and 4G networks because of the constraints and cost of cellular technology. However, it could be used to carry small amounts of data — to set a recording remotely, for example, or activate a BoxOffice movie rental.

Upgrading to the Explora is fairly trivial for users who already have a PVR. They connect the existing cables that run from their satellite dish to a special switch that is supplied with the new PVR. They then connect that to a new uni-cable input on the back of the Explora. There are also legacy outputs so users can connect their old PVRs and other decoders to the Xtraview service. However, they’ll have to call MultiChoice to reactivate Xtraview when they install the new PVR.

The innards of the new box, which is made by the UK’s Pace but assembled in the Eastern Cape by a black-empowered company called Vektronix, have also changed dramatically. There’s a much snappier processor, supplied by specialist chip vendor Broadcom. And the new 2TB hard drive, which is specially designed for constant media use, is faster, spinning at 7 200rpm versus 5 400rpm in the current model.

As with the current PVR, the Explora supports Dolby Digital 5.1 surround sound, when available, via both HDMI and optical S/PDIF. The BoxOffice interface has also been overhauled

“We also focused on making the hardware more beautiful than in the past,” says Kotsaftis. “It has colour coding for all the different plugs. We even obsessed about the bezels and the sweep.”

The Explora can support broadcasts in high-definition of up to 1080p resolution — that’s 1 920×1 080 pixels using progressive scanning where all the lines in each frame are drawn in sequence. However, 1080p is bandwidth intensive, so MultiChoice, like most satellite broadcasters worldwide, broadcasts using 1080i resolution where the odd and even lines in a frame are drawn alternately.

The software and electronic programme guide in the new PVR are designed to have an optimal experience on HD TVs, though they will still work on older standard-definition sets.

The Explora is expected to go on sale in mid-August with a subsidised recommended retail price of R2 499. The current-generation PVR will no longer be manufactured, though it will continue to be available in retail outlets while there is still stock.  — (c) 2013 NewsCentral Media