As is customary at this time of the year, TechCentral is pleased to present its lists of who it considers the biggest technology newsmakers over the past 12 months, both internationally and in South Africa.

We kick it off, as always, with the five people the publication’s editors believe were the biggest newsmakers in the technology space in 2013 worldwide. Next week, we’ll publish our South African technology newsmakers of the year. 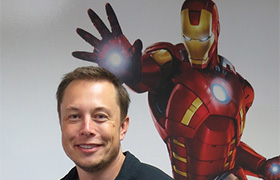 Elon Musk
Making our list again this year is Pretoria-born Elon Musk whose company, SpaceX, this year showcased a reusable rocket. In October, the Falcon 9 Grasshopper rocket reached its highest altitude to date of 744m before being returned to its landing site — watch the video. The 10-story high rocket has been designed to withstand re-entry into the atmosphere and to return to the launchpad for a vertical landing. “We now have all of the pieces of the puzzle to bring the rocket back home,” Musk said after the successful test launches.

As if that cutting-edge rocket science was not enough, Musk also announced the Hyperloop transportation system, which consists of a solar-powered aluminium pod enclosed inside steel tubes that will travel at speeds of 1 300km/h.

Musk, through his electric car company Tesla, also said this year that the company would install “Supercharger” stations across the US, allowing owners of the Tesla Model S electric cars to charge their vehicles for free. Musk said he would take his five children on a cross-country road trip once a route from between the US east and west coasts is sufficiently covered.  — NA Jeff Bezos
Jeff Bezos has a personal net worth of more than US$25,2bn. So, it was small change for him earlier this year when he purchased The Washington Post, which, like most newspapers, has been on a steady decline in recent years, in a deal valued at $250m.

That works out to less than 1% of his net worth. Bezos admitted that he had no idea why he should buy it but got talked into it by the previous owner.

Bezos recently made headlines again when he announced that Amazon would be using drones to deliver products through its new programme called “Amazon Prime Air”. It promises half an hour shipping on packages up to 2,2kg within a 16km radius using “octocopters”. It could be little more than a PR stunt, but it made world headlines. Thorsten Heins
Thorsten Heins took over as BlackBerry CEO in January 2012. He lasted less than two years, before being booted out by the board. The troubled Canadian company’s share price is down 52% in the past 12 months, reflecting the weak demand for its new handsets based on the new BlackBerry 10 operating system.

Heins oversaw the launch of the make-or-break next-generation BB10 platform and devices. It shipped (not sold) a disappointing 2,7m BB10-based in the quarter ended 1 June 2013. The company posted a US$965m loss for the second quarter, and announced it would cut 4 500 jobs. BlackBerry sold a total of 3,7m smartphones for the second quarter, compared to 7,4m devices in the same period in 2012.

In November 2013, BlackBerry fired Heins and entered into a private sale with its largest shareholder, Fairfax Financial Holdings, which injected $1bn into the company. Former Sybase boss John Chen has been appointed as interim CEO.  — NA Steve Ballmer
Microsoft’s ebullient CEO, Steve Ballmer, the subject of some of the craziest video moments on YouTube, is about to ride off into the proverbial sunset.

But he’s going out with a bang. Not only is Microsoft’s share price riding high — it’s reaching peaks last seen in the dot-com bubble 13 years ago — but Ballmer has overseen some of the biggest changes the software maker has seen in decades.

There’s the Nokia deal, of course, which puts Microsoft firmly in the hardware business. The software maker is acquiring Nokia — and licensing a bunch of patents — in a cash deal worth €5,4bn. The acquisition will be pivotal in Microsoft’s efforts to cast off the era of client-server computing and reinvent itself for the mobile computing age — to become the devices and services company it wants to be.

Much else has been happening on Ballmer’s watch: a redesigned Windows built for touchscreens, a common user experience across devices, a new Xbox that is meant to be at the centre of your entertainment universe…

Sure, Microsoft is challenged in many areas — its Bing search engine is struggling to make meaningful headway against Google, for example — but Ballmer certainly isn’t leaving a shambles behind for whoever the board chooses as Microsoft’s third CEO since the company’s founding in 1975.  — DM Edward Snowden
There’s only one person who can possibly top the list of TechCentral’s International Newsmakers of 2013 and that is, of course, former National Security Agency (NSA) contractor turned whistle-blower Edward Joseph Snowden.

Snowden, who released a cache of explosive but classified documents to The Guardian and The Washington Post, exposing mass, warrantless surveillance of Internet users around the world, is now living under temporary asylum in Russia, unable to return to his native US for fear of arrest and lengthy incarceration.

But the 30-year-old has done the world a huge favour, lifting the lid on the spying programmes run by the NSA and its British counterpart, GCHQ, programmes that are undermining the civil rights that form a cornerstone of liberal democracy.

Snowden told The Guardian that he didn’t want to live in a society that engages in surveillance on its citizens. Neither do we.

The Guardian and The Washington Post used the cache of documents to expose the existence of NSA Internet surveillance programmes with names such as Prism, XKeyscore and Tempora, showing that the agency was tapping directly into the servers of leading American Internet companies.

This week, those companies hit back hard, writing an open letter to US president Barack Obama and to the US congress demanding that changes be made to surveillance laws. Microsoft, Apple, Google, Facebook, LinkedIn, AOL, Yahoo and Twitter wrote: “We understand that governments have a duty to protect their citizens. But this summer’s revelations highlighted the urgent need to reform government surveillance practices worldwide. The balance in many countries has tipped too far in favour of the state and away from the rights of the individual — rights that are enshrined in [the US] constitution.”

Snowden has been called many names, everything from a traitor and a dissident to a patriot and a hero. We’re confident history will judge him well.  — DM