Anyone who’s been been shopping for a tablet in recent months will know that for all their bells and whistles, no Android-based tablet has yet been able to quite match up to the Apple iPad. No tablet, that is, until the Samsung Galaxy Tab 10.1.

Close inspection reveals the Samsung hasn’t merely matched many of the iPad’s most attractive features; it has beaten many of them. Considering how much newer it is that’s probably to be expected.

Firstly, the Samsung is marginally lighter and thinner than the iPad 2. Its screen is both higher resolution (1280×800 versus the iPad’s 1024×768) and offers a widescreen aspect ratio with slightly more real estate and a higher pixel density of 149 pixels per inch over Apple’s 132.

Despite the differences, it’s not surprising that Samsung has attracted Apple’s legal ire. Switched off or in stand-by mode, the face of the Galaxy Tab 10.1 looks uncannily like an iPad, as does the box in which it is sold.

Even the power/USB connector looks like the iPad’s, though the slot placement is different and the cables aren’t interchangeable — we checked! The front and rear cameras are only marginally better than those offered on the iPad, but the Samsung wins on the sound front by including two (though smaller) speakers, one on each side of the device. Like its closest rival, it also forgoes the option to increase storage space via an SD or microSD card slot.

But that’s about where the similarities end. The Galaxy Tab 10.1 is an Android device and, although hardware is important, it’s the software that ultimately makes or breaks the user experience.

Running Android 3.1 (Honeycomb), the Galaxy Tab is wonderfully responsive and, even when running multiple applications, there is no discernible lag when navigating menus or switching between apps.

One of our favourite features of Android 3.1 is the ability to resize (certain) widgets. After all, widgets are one of the great trump cards Android devices hold over Apple’s iOS, but previously their inflexibility was infuriating. We hope to see this functionality extended to an increasing number of widgets in future updates.

The Galaxy Tab 10.1 offers outstanding battery life — in the region of 10 hours — which is something no other Android tablet has achieved to date. Without doubt, along with its proportions, this one of the greatest selling points of the device.

Samsung’s decision to include the option of haptic feedback when using onscreen keyboards on the Galaxy Tab 10.1 is great. Haptic feedback — those subtle vibrations that provide tactile confirmation of a “button” press — is something that’s common on smartphones but far less used on tablets despite being no less useful. 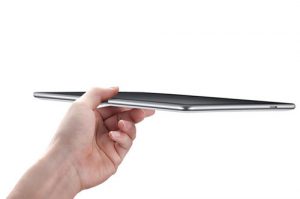 Of course, compared to the variety of applications available for the iPad, Android falls short. There are plenty of Android apps, sure — and many of them cover the same ground as those on iOS — but there are comparatively few that are designed specifically with tablets in mind and it takes a lot of digging in the Android Market to find the good ones.

Still, that’s not Samsung’s fault, and it’s something that’s sure to change as more and more Android tablets hit the market and slowly steal some of Apple’s enormous market share.

The only glaring shortcoming of the Samsung Galaxy Tab 10.1 is the way it interacts — or, more accurately, doesn’t interact — with Mac desktops and laptops. Not only do users require Samsung’s Kies software to do it, but those using Mac OS X Lion will need an old version of Kies to get their Samsung Tab to play ball. If Samsung wants to compete thoroughly with Apple, it needs to make its tablets a viable alternative for people who use other Apple products.

Aside than this and the lack of additional storage options, the Samsung Galaxy Tab 10.1 is, in our view, the best Android tablet to date and arguably the best tablet in the market, full stop. Samsung has built the tablet Android fans have been waiting for.

At launch, only the 32GB 3G and Wi-Fi enabled Galaxy Tab 10.1 is available in SA at a price of R7 499. Considering Apple’s 64GB equivalent is only R100 more, that price point may prove problematic.

Arguably the Samsung is newer, more powerful and boasts a better screen, but that may not be enough to convince consumers to fork out the extra cash for it.  — Craig Wilson, TechCentral